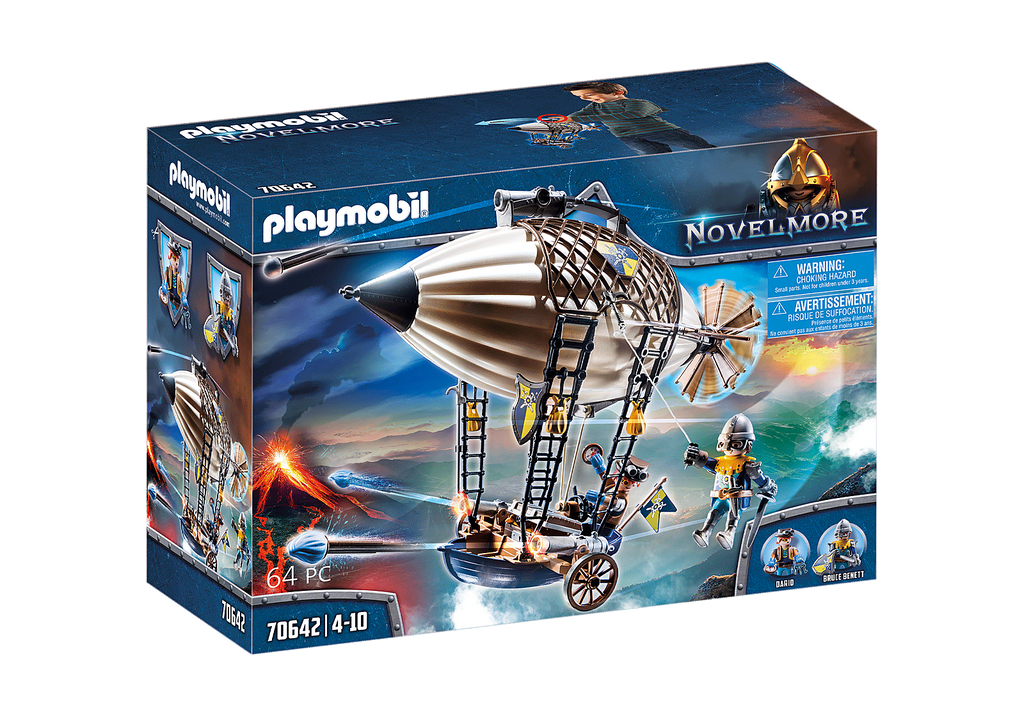 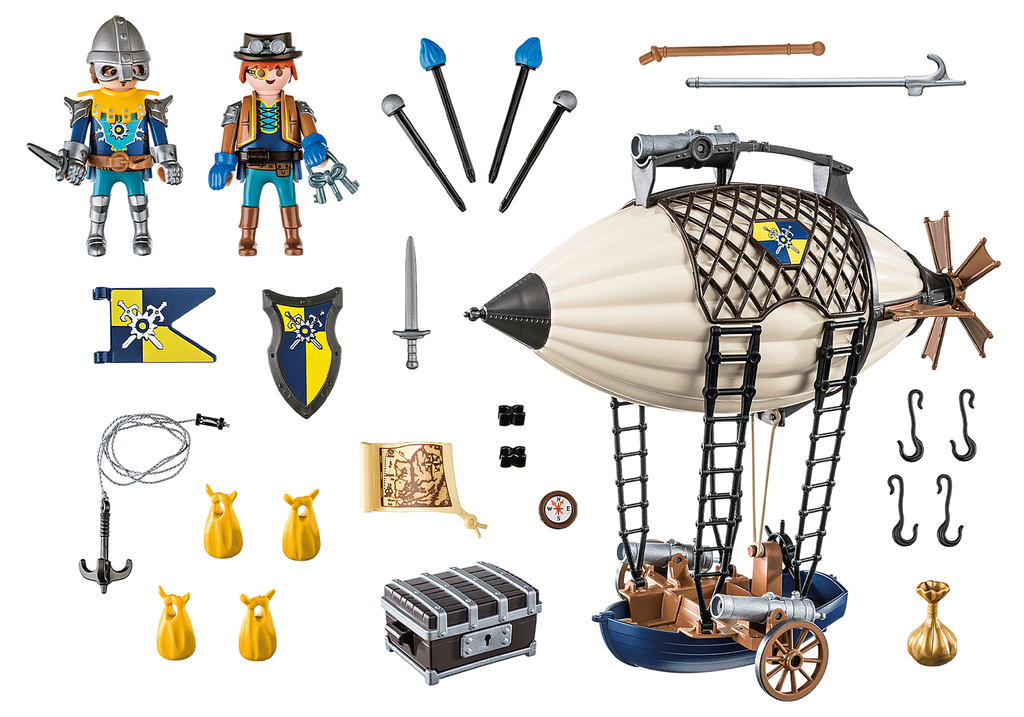 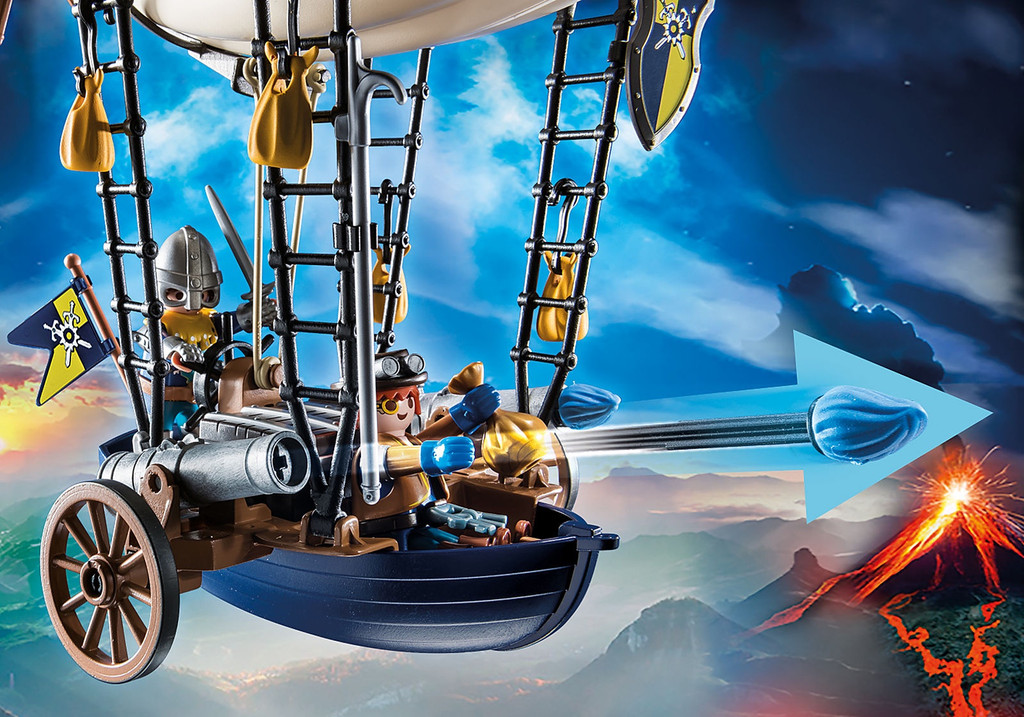 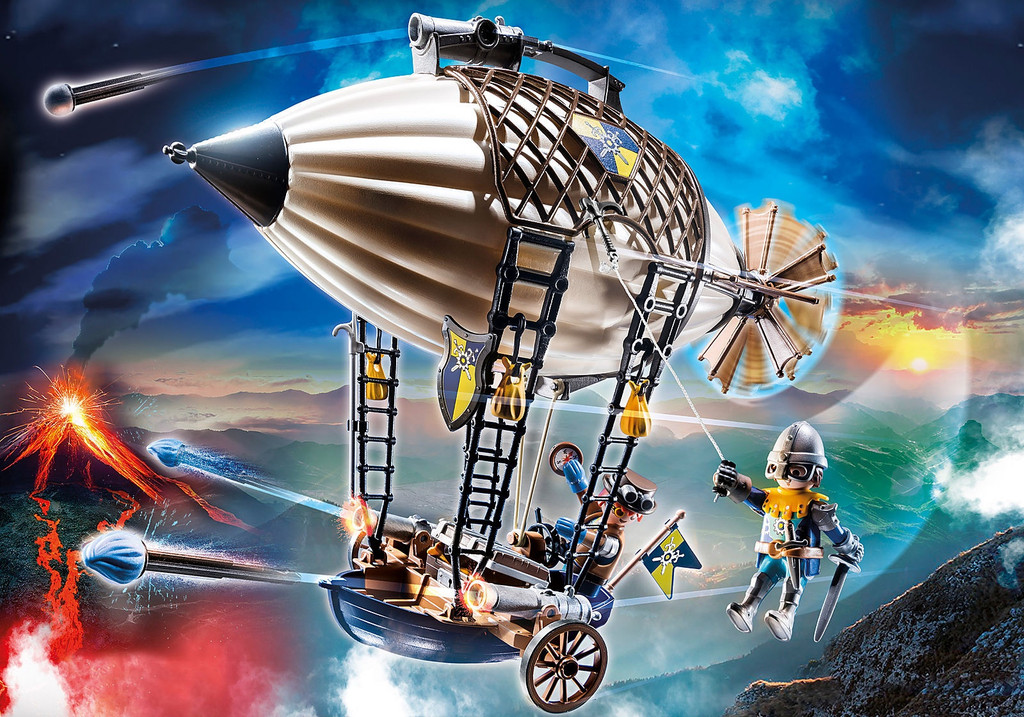 The Zepplin is an ingenious invention from Dario daVanci's workshop. As a ship of the air, it can not only transport people or valuable objects with speed, but can also attack from lofty heights thanks to its integrated cannons.

Dario DaVanci is an ingenious inventor. His latest stroke of genius takes the Knights of Novelmore up in the air, for it is an impressive zeppelin. Not only can the airship transport people and valuable items with great speed, but it is also a well-equipped air attack machine. Thanks to the integrated cannons, the Knights of Novelmore are also ready to fire from above at any time. Alongside Dario there is the brave knight Bruce Benett. The Burnham Raiders better watch out for these battle-ready air knights! Playset includes Novelmore characters inventor Dario DaVanci and knight Bruce Benett, a zeppelin with firing cannons, water bullet arrows, treasure map, treasure chest, shield, sword, gold sack and many more exciting extras for great flying adventures. The zeppelin has space for two figures and can drive on the ground with the wheels.

$199.99
Welcome to the Grand Castle of Novelmore. The kingdom is under the rule of King John, who is fearful of change and issues many laws against new ways of doing things. But, that doesn?t stop his son,...
Add to Cart
Add to Cart
Playmobil

$89.99
Secure your kingdom from unwanted visitors with the Novelmore Fortress. This two-story fortress features a functioning catapult capable of defending the fortress from high above, a fiery crossbow...
Add to Cart
Add to Cart
Playmobil

$27.99
Defend against incoming enemies with the Novelmore Water Ballista. Movable wheels allow the knights to defend against their fiery enemies from all sides, while the functioning ballista releases water...
Add to Cart
Add to Cart
Playmobil

$9.99
Starter Packs - the perfect introduction to PLAYMOBIL theme worlds! In the Novelmore Knights' Duel, these enemy knights are ready for to determine a winner once and for all. The functioning cannon...
Add to Cart
Add to Cart